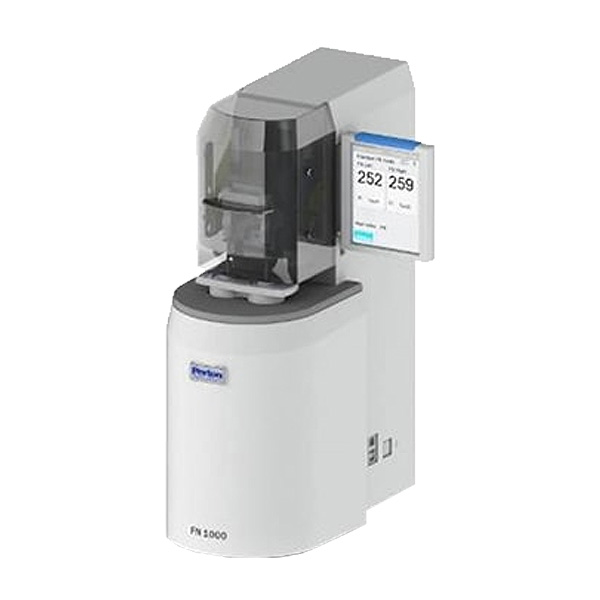 The Falling Number® System measures the alpha-amylase enzyme activity in grains and flour to detect sprout damage, optimize flour enzyme activity and guarantee the soundness of traded grain. Alpha-amylase activity is crucial for final product quality of bread, pasta, noodles, and malt. Anyone handling wheat, barley, rye or sorghum intended for these applications will benefit from the Falling Number® system.

The method is standardized by international bodies such as
the ICC, AACCI, ISO, and ASBC in the standards:

What is sprout damage?

Under conditions of prolonged dampness or rain, grain kernels may start to germinate, or sprout, when the crop is still standing. Germination begins when kernels absorb water and generate enzymes that break down stored starch and protein in the endosperm. The enzymes release sugars from starch and amino acids from proteins which nourish the growing embryo.

Alpha-amylase is one of the enzymes produced in the sprouting kernel. Although some alpha-amylase enzyme is present in the embryo or germ of sound wheat kernels when germination begins the embryo and layers surrounding the starchy endosperm produce the enzyme at an accelerating rate. A severely sprout-damaged kernel contains many thousands of times the amounts of enzyme present in kernels that are in the early stages of germination. Because of this, a wheat sample containing very low levels of severely sprouted kernels may exhibit significant amylase activity. Alpha-amylase converts starch into sugars in the sprouting kernel and similarly breaks down the starch granules in wheat flour when mixed with water to make bread dough.

The Falling Number® method is standardized and should always be performed in the same way. The steps are described below and are also illustrated in the picture.

1. Sample Preparation
For grain, a 300-gram sample is ground in a Laboratory Mill LM 3100 or LM 120 equipped with a 0.8 mm sieve. The large sample is to avoid sampling error. For flour, a representative sample is taken.

2. Weighing
7.0 ± 0.05 g of wholemeal or flour is weighed and put into a Viscometer tube. The flour amount should be moisture corrected by measuring the actual moisture content of the sample.

4. Shaking
Sample and water are mixed by vigorously shaking the tube to obtain a homogeneous suspension.

5. Stirring
The Viscometer tube with the stirrer inserted is put into the boiling water bath and the instrument is started. After 5 seconds the stirring begins automatically.

6. Measuring
The stirrer is automatically released in its top position after 60 (5 + 55) seconds and is allowed to fall down under its own weight.

How it Works - The chemistry behind the Falling Number® method

A number of factors can affect the Falling Number® results. The list below is not a complete list but mentions the most important ones that operators can influence.

A representative sample must be obtained in order to assure accuracy. Through experimentation and statistical confirmation, the sample size has been to be determined to be 300 g. This is extremely important since the alpha-amylase activity of one sprouted kernel may be 100 times greater than that of an unsprouted kernel.

It's critical to obtain a standardized particle size for grain samples. In other words, the samples must be ground the same. The FN method is based on the rapid gelatinization of starch. This process is greatly influenced by the particle size of the meal and it's critical the correct grinder is used - LM 120 and LM 3100 are approved.

The moisture content of a sample will dictate how much sample is to be used for the test. The sample weight is corrected to the appropriate moisture level. The AACC and ICC correct to 14% while the ISO currently corrects to 15%. The moisture must be measured after grinding since moisture loss can occur during the grinding process.

The Falling Number® viscometer tube has very specific dimensions with tight limits, and if these dimensions are not following the specifications, this may lead to faulty results and even breakage when used in the test. Also, the stirrer must have correct dimensions and weight and be free from defect. The viscometer tubes, stirrers, and stoppers must be clean and dry, for obvious reasons. Since soaps are surfactants and may react with the sample matrix, we strongly recommend cleaning with only water and no detergents.

The sample must be mixed well, preferably using the Shakematic, and the bottom of the stopper should be wiped into the tube after mixing. As with all types of measurements, proper analytical lab techniques must be observed.

The end users of wheat, rye, and barley suffer when the grain is sprout damaged, and need to monitor the ingredients they buy. To prevent sprout damaged grain from entering the production chain, farmers and grain receivals should test the grain during harvest, and when it's delivered.

Follow the links in the menu to the right, and read more about the benefits of Falling Number® testing in the grain trade, flour milling and more.

Falling Number® in the grain trade

In years with rainy weather conditions during harvest, significant sprout damage may occur. In such years every truckload of grain should be tested at the grain intake before unloading and segregated to different silo bins to avoid mixing loads of sound grain with sprout damaged grain. Damaged grain can be used for animal feed or other non-baking purposes such as biofuel. The segregation is important as an uncontrolled mixing of even a few percents of highly sprouted grain with sound grain can make the entire mixture unsuitable for bread making or other end product purposes. Segregation also allows for a careful blending of grains to meet FN specifications, particularly at the flour mill.

The Falling Number® value can vary from 62 seconds for heavily sprouted grain with excessive enzyme activity to well over 400 seconds for grains from warm and dry areas. The exact limits for segregation vary between different countries or markets and depending on the end use purpose of the grain. In the EU, the limit for the intervention of bread (common) wheat is a minimum Falling Number of 220 seconds. Segregation limits at 250, 300 and even 350 seconds are commonly used for example by exporting countries for wheat or durum wheat. Limits are lower for rye with segregation below or above the 110-140 seconds range.

Because of the quality impact of sprout damaged grain, the FN value is used in price regulations for payment to farmers or traders in national and international trade worldwide and for verifying trade contract quality specifications. Typically damaged wheat can receive a 10-30% lower price causing significant economic losses to the farmer or grain trader.

Millers may use the FN value to produce products with desired or specific FN values. They may blend flours of various FN values to produce a product with a specific amylase activity. Malt can be added to adjust the value in a similar manner.

The exact FN number value desired will be dependent on the type of product to be produced. Bread flours will have different FN values than those of cracker flours. Bakers may use the FN to dictate to their suppliers the type of product they require for their specific endproduct. Bakers also have the option of manipulating their flours in the same manner as the miller. But by requiring the miller to supply a specific product, a baker can receive a consistent product and would not have to adjust this particular aspect of the baking process. Quality control personnel can use the FN value as a quality control tool to help assure the consistency of both incoming and outgoing products. It provides another important tool for savings of time and money.

Producing noodles from flour with a low Falling Number® is difficult, with dough handling and cutting problems and product sticking to machinery. It also results in an off-color end consumer product which will be sticky after it is boiled. Using flour with the correct Falling Number® will result in savings through improved processing as well as a higher quality end product.

Sound, viable grains are required for high germination in malting barley. Several studies have shown that barley that has pre-germinated in the field has a decreased ability to germinate during the malting process, leading to high levels of beta-glucan in the wort. Even barley with a low degree of germination will be affected. The ability to germinate further decreases during storage, and barley with acceptable germination at harvest could only months later exhibit germinations significantly lower than the generally requested 95% (see chart). The slight pre-germination is not possible to detect through visual inspection but through measurement of a-amylase activity.

To avoid the purchase of pre-germinated barley the Falling Number® analysis can be used for acceptance testing at the barley intake. The method is rapid and determines if the barley is pre-germinated within 5 minutes.
FN > 250 Sound barley, batch OK for intake
FN < 250 Pre-germinated. The risk for poor germination, further tests needed.